St. Augustine: The Ideal Place to Celebrate and Learn About American Black History

Flight to Freedom is a portrayal of how Black slaves escaped the Carolinas for freedom at Fort Mose in Spanish Florida . 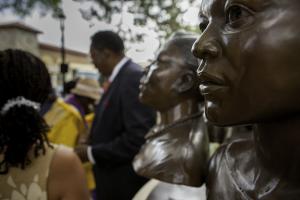 The history of Black Americans in St. Augustine is long and well documented, from the arrival of Europeans in the 16th century into the civil rights struggle that took place here in the early 1960’s.”

In 1763, at the signing of the Treaty of Paris, Spanish Florida came under British rule and the residents of Fort Mose and St. Augustine’s Spanish colonists fled Florida to resettle in Cuba forming the town of Ceiba Mocha. Florida returned to Spanish rule in 1763, until it became a US Territory in 1821, but Fort Mose was never re-established until 1989, when the land was purchased by the state of Florida.

The history of Black Americans in St. Augustine is long and well documented, including the civil rights struggle that took place here in 1964.

Today, black history can be seen and celebrated throughout St. Augustine – from the downtown Plaza de la Constitucion to the beaches of Anastasia Island. And there’s no better time to experience this rich heritage than Black History Month. Narrated tours, museums, historic sites, and concerts are just a few ways to experience the rich history of the black experience in the Nation’s oldest city.

• Leading up to Black History Month, The St. Augustine Film Festival will feature multiple screenings at the Lincolnville Museum and Cultural Center on January 21 & 22. Screenings include Wade in the Water: Drowning in Racism; Fireburn, The Documentary; and Go-Go City: Displacement & Protest in D.C.

• The Flight to Freedom’s performances are about the desperation of the people who risked their lives to escape a life of servitude to live as free men and women takes place at Fort Mose January 27-29.

• The Lenny Foster Photography Exhibition: “Where We Stand” will be on display at the St. Johns County Courthouse daily, 8 a.m. to 5 p.m. Monday-Friday, through April 22, 2022. Work from this series provides a glimpse into the rich African American history of Florida’s Historic Coast. Admission is free.

• The Fort Mose Militia bring the 18th century back to life by practicing their firing drills, and by teaching new members historic weapons use and safety during this monthly Militia Muster. Visitors to the park can witness the weapons demonstrations, which include musket firings.

• Local historian David Nolan will conduct a series of ours at the Accord Civil Rights Museum located in the former offices of civil rights leader, Dr. Robert Hayling. The free tours will be held on February 12, 19 & 26. RSVPs are required and should be made by emailing info@historiccoastculture.com

• I Lived Here as Well – A Woman’s Story, the story of urban slavery from the woman’s perspective is a guided tour led by costumed actors taking place which take place each Thursday- Saturday in February and March at Ximenez Fatio House Museum.

The celebration of St. Augustine’s Black Heritage does not end with Black History month. Throughout the year, visitors are encouraged to visit the following important sites including the ACCORD Civil Rights Museum, ACCORD Freedom Trail, the Plaza de La Constitucion, Dr. Robert B. Hayling Freedom Park , and more.

The SIS Network is looking for Women Speakers and Authors in the areas of Self-Love, Manifestation and Abundance.