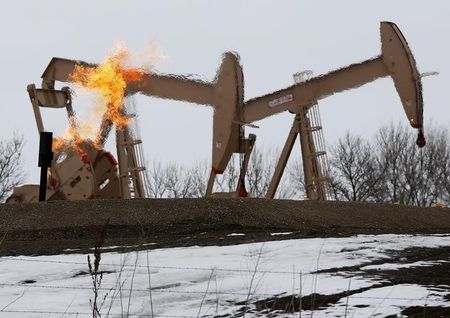 Investing.com — Oil prices edged higher Friday, on course for its fourth consecutive week of gains, as global demand seems to be holding up despite the surge in Omicron cases while supply remains tight.

The number of cases associated with the Omicron variant of the Covid-19 virus continues to mount globally, with China announcing late this week that it has spread to the cities of Dalian and Tianjin.

However, while it has proved to be fast-spreading, studies have also suggested that the variant is less dangerous. Thus restrictions have tended to be less severe than the market first feared at the end of last year when Omicron was discovered.

This comes against a backdrop of lingering worries about the ability of the global oil sector to produce the crude that a recovering world will need this year. After all, the Organization of the Petroleum Exporting Countries and their allies, including Russia, a group known as OPEC+, have struggled to fulfill their output increase promises.

Gains have been tempered Friday after Reuters reported that China plans to release oil reserves around the Lunar New Year holidays between Jan. 31 and Feb. 6 as part of a plan coordinated by the United States with other major consumers to reduce global prices.

The U.S. Energy Department announced on Thursday that it had sold 18 million barrels of strategic crude oil.

The and the round off the week later in the session.

“The higher price environment should continue to see U.S. drilling activity pick up, although clearly, the rig count has grown at a more modest pace compared to previous up-cycles,” said analysts at ING, in a note.

“The mentality of U.S. producers has shifted over the last couple of years, from trying to maximize production growth to much more of a focus on capital discipline.”